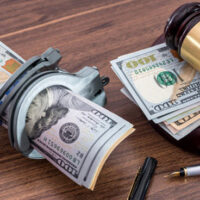 Posting or making a bond can make the difference between you staying in jail for a few hours or several days until the district attorney has decided whether to accept the charges and prosecute you or refuse the charges. If they accept the charges and you do not post bond, you may remain in jail until you have pled guilty or have gone to trial.

A bond hearing is the one opportunity to make an argument to the judge to set a bond and with a competent lawyer the ability to save you money. It is also beneficial to know the judge.

What should I expect?

Most of the time the hearing is very quick. The judge looks at the charges and your rap sheet then sets a bond. But you have a right to call witnesses to testify on your behalf for a lower bond. I never have my client testify. I always obtain a copy of the initial police report so that I have a clear understanding of what the case will be about so I can explain to the judge. I interview the client thoroughly and many times family members. I seek out any photos or documents to support the reasons for a lower bond. Sometimes medical records are important, of course presentation is extremely important in preparing witnesses who will testify about you.

How much will my bond be?

It is entirely up to the judge and the amount can be unpredictable. The judge is always concerned whether you are a flight risk or a danger to the community. In other words, are you going to show up for future court appearances or hurt someone while you are released? If you have missed court in the past or have been arrested before, you will have a higher bond than someone who has never missed court or been arrested. A bond will be higher for a violent crime than a non-violent crime. It is also very important for the lawyer to know the rap sheet, which refers to all prior arrests, and what happened after the arrests because the prosecutor always brings it to the judge’s attention. It is also important to know the judge and how he or she feels about particular charges.

How can I make a bond?

Once a bond or bail has been set by the judge, you have several options in posting it:

When posting the cash bond, a friend or relative or attorney needs to bring the full amount of the bond to the jail or court. Most people do not have the financial ability to pay the full amount so they pay a bail bondsman 12 percent of the amount set by the judge plus some additional fees. The money paid to the bondsman is not refundable, even if the district attorney refuses the charges. All bail bondsmen charge the same fee but they differ in how they collect it.

In non-violent first offender cases the judge will sometimes allow a family member to sign as a surety. The relative or friend must be a U.S. citizen and live in the state of Louisiana. This person should also be worth the amount of the bond and they will be personally responsible for paying the full amount of the bond if you fail to appear for a court appearance. In federal court it is more common for a person to sign for themselves in non-violent cases or white collar crimes.

The same principle applies to real estate. If you fail to show that property is subject to seizure or forfeiture.

Can I get out of jail free?

Yes, you might get lucky but you will probably sit in jail for awhile. Sometimes people are released after a period of time due to the overcrowding of the jail. However, this typically does not happen with persons who are arrested for violent crimes, considered career criminals, or persons that have a history of not appearing for court appearances.

Can my bond be reduced after it has been set?

Yes. A motion must be filed with the court and a judge will hear evidence.

If you are trying to post or make a bond in New Orleans or Gretna, contact the Law Offices of Robert S. Toale. We have decades of experience assisting clients in expediting the bond process and hopefully reduce the amount of your respective bond. Please call 504-370-9233 for immediate assistance, or contact us online to schedule a confidential consultation.

By Robert S. Toale | Posted on February 22, 2022
« Louisiana is Preparing to Reopen for Business with Stay at Home Order Soon Expiring